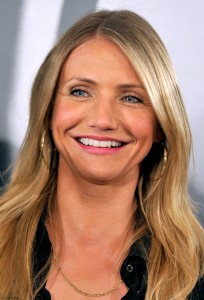 Cameron Diaz was born in 1972 in San Diego, California, daughter of Billie Joann, an import-export agent, and Emilio Diaz, who worked for an oil company. Her mother has English, Scots-Irish, and German ancestry, and her father was from a Cuban family. She rose to prominence during the 1990s, with roles in the movies The Mask, My Best Friend’s Wedding and There’s Something About Mary. Other high-profile credits include the two Charlie’s Angels films, voicing the character Princess Fiona in the Shrek series, Any Given Sunday, Knight and Day, The Holiday, The Green Hornet and Bad Teacher.
The American movie star was named artistic director for Pour La Victoire brand a year ago in 2013. She declared that “When I first started working on the Pour La Victoire shoe collection, the fashion at the time was really high, high platforms. It wasn’t something I was wearing necessarily because I have so much height already.” Yes we are talking about a complete shoes collection, perfect for modern women.