Accessory of the week – Hand fans, between fashion and utility

The origin of the hand fans dates back to the Antic Egypt being discovered in their tombs. They were used by slaves and servants to cool out their masters and protect them from insects. This is why the hand fans were considered a royal symbol, because only the royal ones benefit from them, a fact proved by the discovery of hand fans in the tomb of Tutankhamen, the famous Egyptian pharaoh. At that date, the hand fans weren’t foldable, but rigid and evolved through time from hand fans with slats made of bone, to wood and bamboo to plastic, while the thin material mounted on those slats was made of paper or fabrics like silk, lace or veil, having ornaments like peacock feathers, ostrich feathers, jewels and beads.

The hand fans are found in the history of many people like:  Aztecs, Greeks, Romans, Chinese and Japanese.

In China, hand fans were also considered a symbol of the social status, while their slats were made of bamboo. 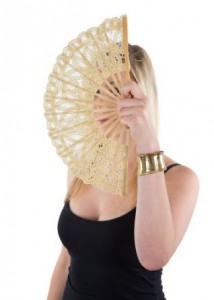 The folded hand fan was invented in Japan in the VIIIth century and was also used by the aristocrats. It had cypress slats and their number indicated the rank of the one using it. Definitely, the hand fans are for Japanese people the eternal fashion accessory of the week since everyone its using it, from common workers to the royal family during the special ceremonies. 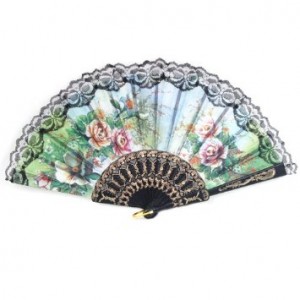 Indeed, the hand fans are known to be a cultural symbol for Asia and in Europe were brought by the crusaders in the XIII th century. The hand fans fashion had immediately grown and soon ladies and mademoiselle from the high society didn’t show themselves without this accessory.

Because of the increasing requests, the hand fans art evolved quickly and started to incorporate painstakingly paintings, jewels and precious metals, ivory slats and laces in different colors which could be matched with the dresses.

In 1797, not only women wore hand fans, but men also according to a guide published at London by William Cock, in which he presented a cod of conversation using the position and moves of the hand fans. Here are some examples:

Reading all this codes might make you laugh but in a restrictive society concerning the relationships between men and women they become necessary. Still, I can’t help to wonder, what if they really wanted to cool themselves and not sending any kind of secret message? 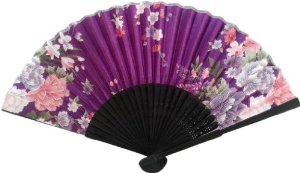 Today all those codes disappeared due to the evolution of the society and the rejection of men to wear hand fans so they are used mainly for refreshing. I’m saying “mainly” because they are used for other reasons too such as: in Spain for the flamenco dance with prints full of color, as a superstition to attract your soul mate if you are having one on the wall painted with the birds of happiness and peonies, or for advertising purposes.

Hand fans are not just practical and easy to store in your purse, but they can give to your outfit elegance and romance. Because of their delicate and feminine look, hand fans make a stylish accessory for brides and not only, being able to be used on any other special occasion.

No matter if you choose to use one as a regular basis during the summer or as a fancy accessory at a special event, hand fans are always useful and represent the perfect fashion accessory of the week.

Accessory of the week – Shawl, a Perfect Spring Piece